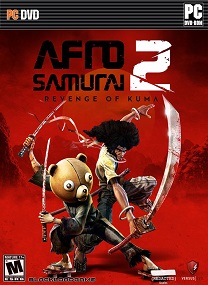 Embark on a journey of redemption, driven by bitter-sweet revenge! The action packed saga of Afro Samurai continues but this time follows the path of Kuma, one of Afro’s closest childhood friends. After witnessing the slaughter of all those he loved and facing near death himself, Kuma has risen from the ashes as a cybernetically enhanced killing machine, with one goal in mind, bloody revenge.

• Interact with memorable characters, both familiar and new, as you relive the past in order to make sense of your future. Seek out those enemies who still hunger for the power of the headbands before they destroy you and all you hold sacred.
• Improved slicing and game mechanics means Afro Samurai remains the undisputed leader in dynamic dismemberment.
• An original story by “American Sniper” writer Jim DeFelice combined with an original soundtrack procured by RZA brings the world of Afro Samurai to life once again.

Note: to reach the config screen, start the game with the following arguments : AfroSamurai2.exe -show-screen-selector