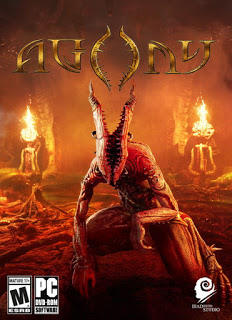 Agony is a dark fantasy survival horror game in genre which is developed and published by Madmind Studio. This free version game was released on 29 May, 2018 for Microsoft Windows. You can also download Space Hulk: Tactics, Damsel, Endless Space 2 Galactic Statecraft and much more on Gamesave.

In this version of game player take the controls one of the “Martyrs” who is trapped in Hell without any memory of his former life and have to escape form this unconscious world and return to the land of the living. The game was set in semi-open world in which their are lot of different paths and endings and many exploration possibilities as well as secrets to uncover. By exploring and interacting with other weary souls, player will soon understand that there is only one way to escape from Hell, and it will require meeting the mystical Red Goddess. In this game player will be able to possesses the unique ability to other Martyr. Player will be able to use mechanics such as crouching and holding his breath and also able to avoid demons. If the player wants to escape form this unconscious world he has to solve puzzles and unlock new areas to meet with Red Goddess. The story features multiple endings, dependent on how the player progresses and choice he make. So be aware and travel carefully.