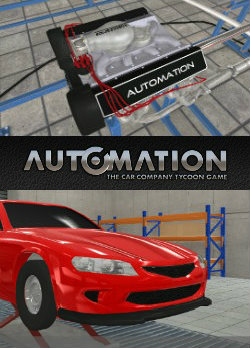 Automation is a car company tycoon game in which you design and build cars from scratch.

It is you who designs everything from the very core that is the engine, over the chassis, to the suspension and the car’s looks.

Several games have tried this before… but were able to merely scratch the surface.

Go ahead, build your dream-car company, or simply aim to dominate the world markets with your superior design skills!

The game is still in development, with the Engine Designer and Car Designer already available for you to try out. We release new milestone versions of the game as they are done, adding new features and content as the game moves closer to completion. Automation is aimed to be released on Steam Early Access in the next few months, and further development will continue until Automation is a complete Car Company Tycoon Game .

Automation is still in development, but you can get in on Early Access now! You’ll get instant access to some extra content for the current version of the game, and a copy of the full version when it’s completed, as well as every update along the way.

IMPORTANT NOTE: Automation is still heavily in development. There is already many hours of interesting gameplay to be had out of Automation, but some major features are not complete. Large updates are usually released every few months