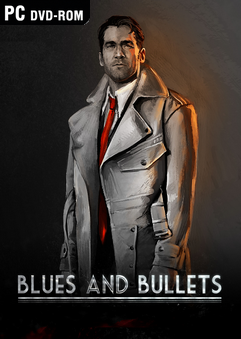 Eliot Ness, the former leader of the legendary Untouchables, wished only to spend the rest of his days working in his diner, not dwelling too much on the cesspit of corruption his city, Santa Esperanza, had degenerated into.

But things rarely go as planned.

When children suddenly start to disappear and the police just simply a blind eye, Eliot decides to take the law into his own hands, track down the culprit and bring him to justice by any means necessary, even if he has to abandon his dreams of a peaceful life and again get embroiled in shootouts with the usual array of assassins and hoodlums.

Eliot Ness (voiced by Doug Cockle) is the agent who jailed gangster Al Capone. In this new episodic game, Eliot Ness is a retired cop who runs a diner called Blues and Bullets. One day someone tells him that Al Capone needs his help to find his kidnapped granddaughter. His former nemesis is the only man he trusts to get her back.

The player will search for clues to find leads in the investigation. Clues will include mutilated body parts. Clues can be matched to witnesses. There will also be shooting sections.[1] The game will be in black and white with occasional tints of color. Interacting with other characters will also play a large part in the game.

One Response to Blues And Bullets