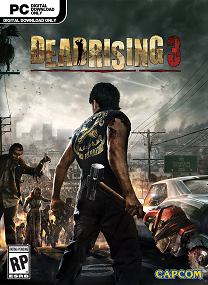 Dead Rising 3 marks the return of one of the most popular zombie video game franchises. Set 10 years after the events of Fortune City in Dead Rising 2, players are introduced to Nick Ramos, a young mechanic with a strange tattoo and a mysterious past, who must find a way to escape a city full of zombies before an impending military strike wipes the city of Los Perdidos, California, and everyone in it, off the map. Nick cant do it alone – he must join up with other survivors to stay alive. They must fight their way out before its too late.

Features:
• A darker story of survival in a massive open world — Dead Rising 3 takes the celebrated series in a new direction by introducing a cinematic storyline with darker humor and more personable characters fighting to survive in the new city of Los Perdidos. Featuring a massive and dynamic world bigger than the first two titles combined, Dead Rising 3 represents a new benchmark for open-world gameplay. The game allows you to explore the vast city of Los Perdidos seamlessly with fast load times, keeping you immersed in the action and stunning next-generation visuals. Overwhelming zombie hordes with intelligent AI and shared awareness will challenge you like never before, forcing you to employ all your cunning, combat skills and creativity to stay alive.

• The ultimate zombie sandbox — Anything and everything is a weapon. You can create your own tools of zombie destruction with the virtually limitless variety of combo weapons — anytime, anywhere. A regular sledgehammer or a table saw might not be enough to hold off the zombie horde, but fuse them together and you’ll do massive damage with the fearsome Sledge Saw, just one of hundreds of potential weapon combinations. Dead Rising 3 places new emphasis on vehicles that are critical to survival. But watch out — zombies cling to cars, affecting the steering physics, and attack you while driving!

• Easy to play, hard to master — With the ability to explore the game at your own pace without time constraints, a new streamlined save system and other improvements, Dead Rising 3 promises to be accessible and intuitive to play. At the same time, hardcore players will face tough-as-nails zombies in Nightmare Mode with classic Dead Rising rules, where time is the enemy and the countdown clock never stops running. The city of Los Perdidos offers near-limitless zombie encounters and missions in a multitude of settings, and as you progress, weapon combinations become more deadly.

• Unlimited co-op action — Team up with a buddy for endless zombie-killing mayhem through online co-op, with asynchronous matchmaking that allows you to jump in or out of the game at any time. Not only will you help your friend advance, you’ll also contribute to your own story progression and earn experience points that will carry back into your own game.

Note: when testing, we noticed that on some pc configurations the game doesnt exit correctly – it also happens to the original uncracked game (e.g. Win7 + Radeon) … so blame the devs