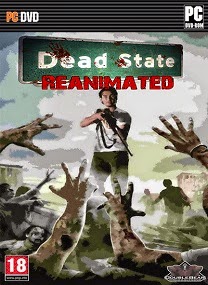 Dead State is a compelling, high-tension survival RPG set in central Texas at the collapse of civilization and the dawn of the undead apocalypse. As society is beginning to fall apart, the player must organize a group of survivors together, fortify a shelter, scout for food and supplies, negotiate with or defend against other factions, and maintain order inside the shelter as humanity teeters on the brink of extinction. Dead State is a full-fledged RPG featuring base building and management, turn-based tactical combat, and reactive story and dialogue with an emphasis on survival at any cost.

Attract new allies, scavenge food and supplies, and protect your shelter at any cost. Do you have what it takes to lead a desperate group through a crisis? This is your chance to find out.

The Highlights
• Major overhaul of combat balance! Core combat systems have been thoroughly reworked to take advantage of all the data and feedback we’ve gathered over the months since Dead State’s original release. Ranged weapons, melee weapons, armor, special attacks, ally / PC healing, and more have been reworked and carefully tested to create an engaging and challenging combat experience. Even the core combat system has been tweaked so that AC is calculated before damage reduction; this change makes combat more consistent and more fair​.

• New PC Infection option on New Game menu! Create a new game with PC Infection checked and your character will be as susceptible to infection as your allies are. Carefully manage your antibiotics and change your combat strategies to ensure your own survival!

• Alarms! That’s right – we’ve added alarms to buildings in several areas. Red, blinking lights warn you that there’s an active alarm on a building. Use your Science skill to deactivate an alarm and prevent a looting distraction from becoming a noisy attraction!

• Stability improvements! We’ve rooted out every crash and progress blocking bug to make sure you have the smoothest possible experience. Several popularly requested usability improvements have been added, such as friendly fire confirmation, looting piled up bodies, and an option to toggle Live Shelter movement on and off.

• Pathfinding improvements! Both allies and the undead have received major pathfinding adjustments that will reduce lag some people have experienced as well as make movement more consistent and natural.

1. Unpack the release
2. Mount or burn image
3. Install
4. Copy the cracked content from the SKIDROW folder and into the main install folder and overwrite
5. Block the game in your firewall and mark our cracked content as secure/trusted in your antivirus program
6. Play the game
7. Support the companies, which software you actually enjoy!