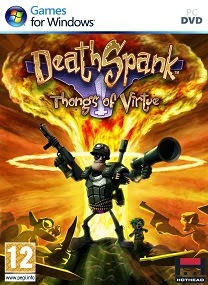 Join DeathSpank in the hunt for the Thongs of Virtue! Fight through war-torn battlefields, tame the High Plains and sail the savage seas. Experience fast paced action-RPG combat with over 150 quests and tons of weapons, armor and loot to collect.

Key features:
• Hilarious NEW Story of EPIC Proportions: Guide DeathSpank on an all new voyage spanning massive war-torn battlefields, savage seas, and more as he hunts down magical thongs in an effort to combine their powers and create peace and harmony in the universe.

• All NEW Loot to Collect!: Vanquish evil using an all new array of weapons, armor, and loot spanning different eras of history.

• Sidekick Co-Op Mode is BACK, and it Brought A Friend: Grab a friend and choose one of two hilarious sidekicks to help save the world in co-operative couch play. Use your magical skills as Sparkles the wizard or your kung-fu moves as the new ninjatastic Steve.

• Tons of Hilarious NEW Quests and Characters: Battle your way through over 150 new quests and puzzles and meet a brand new cast of hilarious characters in the funniest game ever involving…thongs.

1. Unpack release
2. Mount image or burn it
3. Install
4. Copy the cracked content from the SKIDROW folder on the DVD to the main installation folder and overwrite
5. Play the game