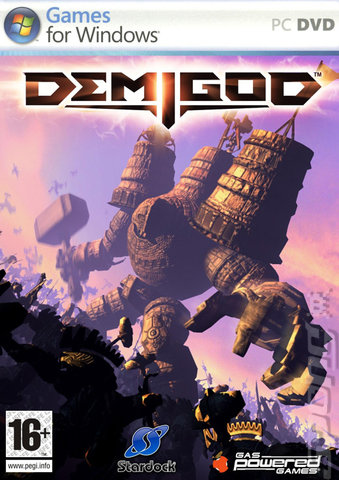 The balance between light and dark was under threat at the end of the 87th migration. One of the Ancients, the Progenitor, had shared Names and Ways with his underlings on the other side of the Veil. The gathering of Ancients rectified the situation and the Progenitor was cast down. However, the Ancients needed a successor for the Progenitor. The most likely candidates were his many offsprings, begat by mortal consorts, who still retained some of their divinity. Thus, the Ancients proposed a game for the offspring to prove themselves worthy. For this purpose messengers were sent to the Dark and Light Places to summon the pretenders to Rokkur where they would throw down their brothers and sisters in the arena to win the favor of the Ancients and ascend to their ranks.

The victor would become…a god!

Demigod is a variant of the fan-made map modification Defense of the Ancients of Warcraft III: Reign of Chaos. The player takes over the control of one of the eight demigods and competes in two teams with up to five demigods each in the various arenas. Each team also spawns minions from controlled portals that cannot be controlled and demigod-unique minions which may be summoned.

The game focuses heavily on multiplayer and as such does not feature a single player campaign. Available game modes consist of the following:

Skirmish mode: The player may customize a single arena match to consist of assigned teams and its demigods, as well a specified may to play.

Tournament mode: The player may compete in eight random arenas (with random objectives) together with randomly assigned demigods. At the end of each round, favor is awarded to the player for various accomplishments made in each arena match and the total favor (ranking) earned from all arena matches is viewable at the end of any arena match.

Tournament mode is not available in multiplayer the players instead participate in Pantheon which is a persistent on-line universe in which players choose a faction and a demigod and then compete for favor points in order to help their faction ascend. Multiplayer for these game modes are available for up to ten players.

Objectives of a game mode may consist of one of the following:

Fortress in which each team has a specific number of fortresses and needs to destroy the ones of the opposing team;

Slaughter which requires the teams to slay a specific number of enemy demigods;

Dominate in which each flag capture increases the speed a team earns points until the level cap has been reached;

Conquest which requires the teams to destroy the enemies citadel and protect their own.

Playable demigods are divided into assassins and generals. The assassins consist of: Torch Bearer, Unclean Beast, Regulus, and The Rook. The generals consist of Oak, Queen of Thorns, Sedna, and Lord Erebus. Each demigod has specific roles and skills representing those roles. Sedna for example is the primary healer demigod.

Controlling only the demigod, the player earns experience points by fulfilling objectives including capturing flags, destroying enemy structures, as well as killing other demigods and their minions. When a certain number of experience points is a reached, the player will gain a new level and may invest one skill point to any available skill unique to that demigod, viewable in the skill tree sheet. A demigod may achieve experience and level up until the maximum level cap of 20.

Additionally, players receive a continuous small amount gold by holding specific points on the map and gain large gold rewards by killing (or assisting in the death of) enemy demigods. This gold is then used to either upgrade the team’s citadel or purchase items for player’s demigod. Upgrading the citadel may consist of improving structures (including the citadel), improving minions, or improving other benefits for the team. The player may also buy up to five articles of clothing ranging from rings over breast plates to head gear, each with different bonuses that may affect the demigod or friendly units. The player may also buy health potions, mana potions, scrolls, and more powerful items from artifact shops randomly placed around the map. Favor points may also be used to buy a unique award item which will grant the demigod the corresponding passive effect until the round ends.