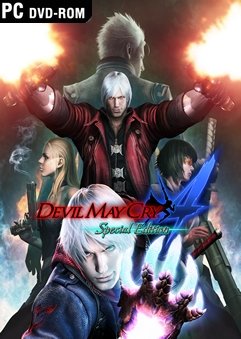 On the coast of a distant land lies the castle town of Fortuna. It is here that the group known as the Order of the Sword practices a mysterious religion. They revere the demon warrior Sparda, who as their god fought to protect humans, and are committed to the extermination of all demons. Nero, a young knight from the Order, is tasked with finding Dante, the mysterious assassin who murdered the head of the Order of the Sword. At the same time, more demons begin to appear throughout the city. Nero will soon come to discover the motives behind Dante’s appearance and the truth behind the intentions of the Order of the Sword.

> Vergil is a strong, yet technical character, so newcomers can play with confidence while seasoned veterans can further sharpen their skills as they master his moves. Great for all skill levels!

> Lady, in her first playable appearance, specializes in long-distance, powerful attacks. Using the Kalina Ann rocket launcher, a grappling wire, and a variety of awesome guns, she can fight with grace and ease.

> Trish utilizes the demonic sword Sparda to perform a wide variety of combos. The Sparda can even home in on and attack enemies autonomously while Trish fights in tandem!

> Fight a massive number of enemies simultaneously for extra difficulty and maximum satisfaction!

> Small adjustments have been made to improve the gameplay tempo, and provide an even better experience for players both new and returning.

>Signature blend of guns and swordplay

>Distinct set of weaponry and moves for all characters

1. Unrar
2. Install the Update to the dir where main game is installed
3. Copy over the cracked content from the /Crack directory to your game
install directory
4. Play the game
5. Support the software developers. If you like this game, BUY IT!