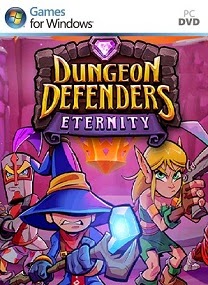 Dungeon Defenders Eternity-SKIDROW is the definitive version of the hit tower defense action RPG! Slice, shoot and pulverize your enemies, or build defenses to do the dirty work for you. Grab three friends and build a team of heroes from twelve different classes, each with their own defenses and abilities. Then embark on an adventure to defend Etheria from the Old Ones’ army!

Eternity boasts all new missions, new features, a rebalanced endgame, secure online play (no more hacking!), along with a wide selection of content from the original game. Now is the perfect time to experience Dungeon Defenders and its expansions the way they were meant to be played!

Key Features
• Defend with towers
• Four-player online co-op
• Ground-breaking story about a group of children who try to save the world
• Level up 12 different hero classes
• Argue about which hero is the best on our forums
• Kill an Ogre with a chainsaw sword
• Fight a gigantic dragon (Spoiler!)
• Put some wings on your heroes and dye their clothes pink — because you can
• Look up the best map builds online; pass this knowledge off as your own

New Features:
• Secure dedicated servers for anti-hacking protection
• Dyes that allow you to customize costumes and visible armor
• Crafting system to create and modify high tier items from blueprints
• Pet hatching and growth system, with activatable abilities
• Dashing and manteling systems for better mobility
• Weapon swapping between two weapon sets
• Community tavern, where you can talk and trade with up to 16 other players before starting a mission
• Private tavern, where you can start missions with just yourself and your friends
• Quickmatch feature where you can quickly join a mission with other players (optional)
• Cross-Platform play with PC, Mac, Linux, and Mobile all playing on the same servers
• One Dungeon Defenders account, with your progression accessible from any account. Playing on supported Android devices requires purchasing the game on Google Play.
• Transmog System which allows you to change how your visible armor looks (or make it invisible!)
• 34 new equipable emotes (not included with purchase of base game)