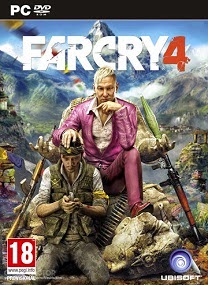 Far Cry 4 takes place in the fictional country of Kyrat. The player assumes the role of Ajay Ghale attempting to fulfill his mother’s dying wish by spreading her ashes in Kyrat. Ghale gets caught in the midst of a brutal civil war between The Golden Path and Pagan Min’s Royal Army. Players will be able to craft their own stories as they travel through this exotic open world, using new and updated weapons and vehicles as well as wits to survive.

In Far Cry 4, you’ll conquer fortress outposts from the back of a six-ton elephant and take to the skies as you rain down explosives from the seat of your gyrocopter. The vertical landscape of the Himalayas isn’t just a pretty backdrop, but a playground that encourages the player to fight, hunt and explore, grappling up cliffs or launching into the air, plummeting to the valley below in a controlled free fall with your wing suit. You’ll carry with you a truly unique arsenal of weaponry that lets you play your way, whether it’s sniping, sneaking or all-out assault. When all else fails, animals can be your biggest allies or your greatest danger, as Kyrat’s wilderness delivers on the promise of a true open world anecdote factory.

Features
• REVOLUTIONARY OPEN WORLD CO-OP: Far Cry 4 allows for a second player to drop in and out at any point, re-imagining the cooperative experience in the true spirit of Far Cry for the next generation.

• MASSIVE OPEN WORLD: Discover the most diverse Far Cry world ever created. With terrain spanning from lush forests to the snowcapped Himalayas, the entire world is alive?and deadly.

• ABUNDANT NEW WILDLIFE: From leopards, rhinos, black eagles, and vicious honey badgers, as you embark on your hunt for resources, know that something may be hunting you…

• NEW WAYS TO GET AROUND: Scout enemy territory from above in the all-new gyrocopter and then plummet back to earth in your wing suit. Climb aboard the back of a six-ton elephant and unleash its raw power on your enemies.

• POWERFUL NEW WEAPONS: Choose the right weapon for the job, no matter how insane or unpredictable that job might be. With a diverse arsenal, you?ll be prepared for anything.