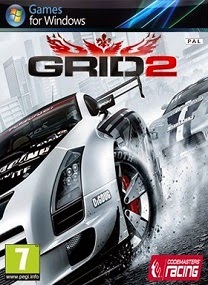 Be fast, be first and be famous as the race returns in GRID 2, the sequel to the BAFTA-award winning, multi-million selling Race Driver: GRID. Experience aggressive racing against advanced AI and become immersed in the race with GRID 2’s new TrueFeel™ Handling system which powers edge of control exhilaration behind the wheel of every iconic car. The next generation of the EGO Game Technology Platform delivers genre-defining visuals and jaw-dropping damage as you prove yourself across three continents in a new, evolving world of motorsport. Earn fame, fans and fortune as you blaze your way to the top in intense, relentless races on licensed circuits, beautifully realised city streets and lethal mountain roads. GRID 2 will also set the new standard for multiplayer racing with innovative modes, an entirely separate progression system and deep integration with RaceNet, the free online extension for Codemasters Racing games.