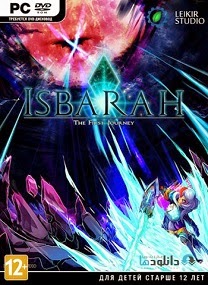 Platformer style cross-genre of bullet hell Isbarah is a dimension where dreams can become reality daughter of the God of the universe the young goddess Iria a great heroine driven by righteousness learns of the Designed manifested beings created by the dreams of humans and Designless creatures who are unable to evolve beyond mere conception. Isbarah is a constant test of both your reflexes and sanity to the core until the final hit bringing the boss down and the feeling of victory will be immeasurable and a perfect representation of your experience, Think of it as a Chellenge worth enduring every step of the way making the story relatively fascinating.
bullet hell game through and through always flooded with projectiles even on the lowest difficulty this is an absolute monster of a game where every single stage is an endurance and despite the challenge and to feel well-equipped enough to tackle the difficulty you’ll need every reflex to be sharp as diamond to defeat a boss.
Isabarah is rich with complexity has a lot of content packed in dishing out the rewarding vigor once you lay down the finishing blow against a boss that tormented you for hours will be an opportunity to get the coveted 7/7 ranking and the amount of content you’ll find after mastering the mechanics will keep you on board for a good long while.
Isbarah’s presentation is very appealing expressive and stylized at every turn character models are quite well done visual effects will be kicked up a notch during the climactic final stages of each attack  while Cutscenes are presented in a comic book style projectiles flood in like crazy, each with varying positions and patterns. The animations of the characters in-game do give off a stiffer aesthetic, but they don’t impede upon gameplay, especially when your hitbox (or “collision circle”) is clearly visible, making dodging blasts more manageable. This is all topped off with a killer metal soundtrack. Thrash mixed with power metal, Isbarah’s soundtrack is comparable to the guitar licks heard in Guilty Gear. It has some deficiencies, but Isbarah’s presentation is very appealing.