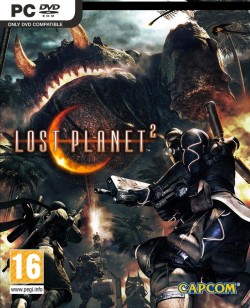 the landmark third-person shooter which debuted on Xbox 360  and went on to sell over 2.3 million units worldwide after its  release. Lost Planet 2 offers deeper insight into the world of  E.D.N III and the uncertain fate of future mankind.

Players will control heroes from each faction across 6  interconnected episodes, viewing the war from the perspective
of each, creating a truly unique interactive experience. With this concept, players will have the opportunity to engage in  the story in a much more dynamic way as plot threads evolve  from different players perspectives.

The intense and action-packed campaign mode comes with the ability to form teams of up to 4 players online. Beyond the  deep single-player and co-op modes, Lost Planet 2 is loaded  with extensive multiplayer modes allowing up to 16 players to compete online, each with their own customizable avatar.

Lost Planet 2’s biggest weapons come on two legs: the heavily armed and armored robotic Vital Suits return in greater numbers and variety than the first game. There are VS that transform into other vehicles, hold up to three players and  some that even take multiple players to operate.

Co-op action: Team up to battle the giant Akrid in explosive 4  player online co-operative play. Teamwork is the player’s key to victory as the team is dependent on each other to succeed  and survive.

Massive scale of enemies: Players skill on the battlefield and  ability to work as a team will be tested like never before
against the giant Akrid. Players will utilize teamwork  tactics, new weapons and a variety of vital suits (VS) to fight these larger-than-life bosses.

Deep level of character customization: Players will have  hundreds of different ways to customize their look, nom de guerre, emotes, and weapons to truly help them define their  character on the battlefield. A wide array of customizable abilities range from taking less damage, to running faster to operating data posts quicker

Rewards System: Players will receive rewards for assisting teammates and contributing to the team’s success

Exciting new VS features- Based on fan feedback, the team has implemented an unbelievable variety of Vital Suits and new ways to combat VS’s. The new VS system will have a powerful  impact on the way the player takes to the war zone in Lost Planet 2

1. Extract
2. Mount image or burn it
3. Install
4. Copy the content from the SKIDROW folder on DVD 2 to your
installation directory and overwrite
5. Play the game
Block game exe in your firewall to prevent the game from trying to go online ..