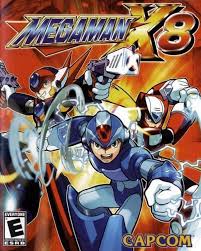 Gameplay is largely the same as previous games. Both X and Axl specialize in mid-long range fighting while Zero is the same with close range. X, however, was changed from X7 to be more like his original incarnations in terms of firing. He can only fire straight ahead now, possibly to make his gameplay different from Axl (who can fire in all directions). Axl’s firing capabilities are meant to resemble Bass from Mega Man & Bass, where not only can he fire in different directions (all around instead of just upward or diagonally like Bass did) but also Axl’s rapid fire ability is greater than X’s. Much like X5 and X6, X can obtain the parts from the Dr. Light capsules for 2 special armors, with one slight difference that he can now create a customized armor using the parts from both armors, but at the price that the Giga Attack ability is inaccessible. Instead of copying weapons like X, Axl receives new guns upon defeating Mavericks and can use them indefinitely, like Zero’s techniques, though his attacks aren’t as strong compared to X’s weapons, and Zero’s techniques. In addition Axl’s A-Transability no longer applies to smaller Reploids, and its transformations can now be controlled rather then serving as a temporary power-up when the Reploid DNA is collected. Zero can also obtain new weapons from certainRare Metals that make gameplay with him vastly different. His new weapons include a Glaive, Knuckles,Hammer, Fan and the large sword used by Sigma (available upon starting a New Game+ after completing the game on Normal or Hard difficulty). Unlike X7 he can use any special technique regardless of which weapon is equipped, and certain special techniques can also change when a particular special weapon is equipped.

Certain enemies (and even bosses) can now execute a “guard”, which makes them invulnerable to most attacks. However, the three characters can use “guard break” attacks, allowing them to defeat these enemies, these being X’s fully charged shot, Zero’s third Z Saber slash, and every eighth shot of Axl’s Axl Bullet rapid fire. Certain Special Weapons can also instantly break guards or ignore barriers, notably Bamboo Pandemonium’s weapons and the Sigma Blade.

One Response to Mega Man X8