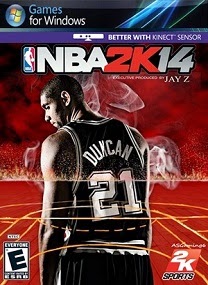 NBA 2K14 marks the return of the world’s biggest and best NBA video game franchise. Following more than 38 Sports Game of the Year and “Best Of” mentions last year, 2K14 is set to rule the virtual hardwood once again. This year, 2K joins forces with the league’s most dominant force: LeBron James. With a soundtrack hand-picked by the King, refined controls featuring the new Pro Stick™, the return of Crews, new Signature Skills, enhanced defense including blocked dunks, and more, NBA 2K14 will raise the bar yet again.

Features:
• Crews – The single-most requested game mode is back! Face off against opposing crews online using your MyPLAYER. Create your logo and face off in 5v5 battles with other crews featuring leaderboards and stats. (PS3 & Xbox 360 only)

• Dynamic Living Rosters® powered by Stats, Inc. – Player attributes and tendencies automatically update daily to reflect true life hot and cold streaks. Now, each game played in the NBA can have an effect on your game

• MyTEAM – Back and better than ever, with new player modes, multi and single player tournaments, and much more. (PS3 & Xbox 360 only)

1. Unrar.
2. Burn or mount the image.
3. Install the game.
4. Copy over the cracked content from the /Crack directory on the image to your game install directory.
5. Play the game.
6. When prompted for account creation, enter any age that it will accept. Then decline to the terms so that no account is created. Play the game offline.
7. Support the software developers. If you like this game, BUY IT!