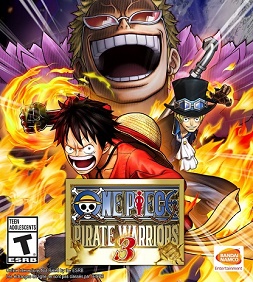 One Piece Pirate Warriors 3 Repack Blackbox is the third installment of the sub-series from the Omega Force studio, the creators of the two previous editions, working under the aegis of the Bandai Namco Entertainment company; the cycle is a spin-off of the Japanese hack’and’slash saga – Dynasty Warriors. The production is based on a popular manga named One Piece; unlike the previous installments, this time we can experience the beginning of our hero’s career as a pirate.

The protagonist in One Piece: Pirate 3 – Luffy – is a young corsair, dreaming about becoming the Pirate King; to accomplish this task, he needs to assemble a group of similar swashbucklers and defeat numerous enemies, that are preventing him from reaching his goal. The campaign mode allows us to complete a series of missions, in which Luffy visits various locations and encounters characters known from the comic book predecessor, including the evil Donquixote Doflamingo and his missing friend Sabo.

The gameplay is extremely similar to the Dynasty Warriors series, which means that we are dealing with a TPP slasher with heavy focus on spectacular combat; using melee weapons and magic, the player fights dozens of enemies at a time. The dramatic skirmishes often times end with an extremely challenging boss fight; for the sake of variety, the developers have also prepared many different playable characters for us to choose, with different abilities and fighting styles.

One Piece: Pirate Warriors 3 stands out due to its humoristic approach, displayed both in the script and the colorful art style.