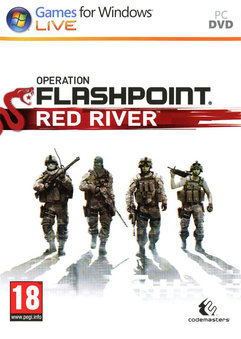 Stand together with the US Marines in Operation Flashpoint: Red River, the ultimate tactical infantry shooter.

You’ll play as one of four distinct and complimentary classes in a Marine Fireteam – Grenadier, Scout, Rifleman and Automatic Rifleman – as you embark on an epic campaign. Take on huge sandbox battlefields in the new setting of Tajikistan, a geopolitical hotspot bordered by Afghanistan and China. Face the unpredictable threat of all-new insurgent enemies and the might of the world’s largest Army, the Chinese PLA. Use authentic tactics on your own initiative in solo or in four player drop-in, drop-out co-op campaign.

1. Burn or mount the image
2. Install the game. Enter XXXXX-XXXXX-XXXXX-XXXXX-XXXXX when prompted for a serial number
3. Copy over the cracked content
4. Play the game using RedRiverLauncherc.exe (Yes, the one with the c
5. If you don’t have a local profile for XLive do the following
6. Press Home
7. Select ‘Create New Profile
8. Scroll down the text
9. Click ‘create a local profile
10. Enjoy! 🙂