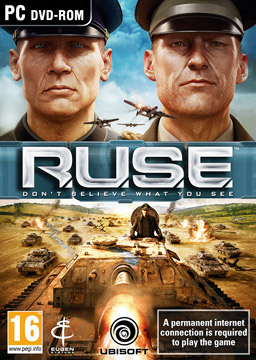 R.U.S.E™ is a one-of-a-kind real-time strategy game that allows players to bluff their enemies to lead their nation to victory, controlling the action using views that range seamlessly from the heart of the battlefield to the full theatre of war. Players will be plunged into the action thanks to the exclusive IRISZOOM® engine which offers an intuitive interface that allows for smooth, rapid transitions from a birds-eye view of the entire conflict, down into the heat of the battle and vice versa.

In R.U.S.E, your brain is your ultimate weapon as you fight a war of perception, where your ability to deceive and mislead your enemy determines success. A first in a strategy game, R.U.S.E reinvigorates the genre by using deception to give new-found depth to the gameplay.