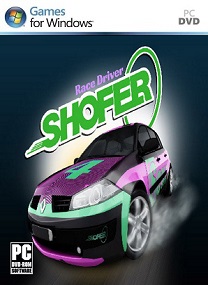 SHOFER Race Driver is a racing genre video game by Zhoori Maang Studio.
The player controls a race car in a variety of races, the goal being to win the race. In the tournament/career mode, the player must win a series of races in order to unlock vehicles and tracks. Before each race, the player chooses a vehicle, and has the option of selecting either an automatic or manual transmission. in SHOFER the cars can suffer mechanical and visual damage.

Career (SHOFER)
Career Mode allows players to unlock new vehicles and new race tracks. Players progress through the career mode by beating a series of “Tournament”. Players complete the career mode (SHOFER Tournament) upon defeating the “Stages” and the kings of Street for each event type discipline.

Customization:
• Multi user and Multilingual GUIs and dialogues
• In the “My stuff” feature Players can see all cars in their garage and specifically choose how to control cars
• Visual tuning is just sets of livery for each cars.
• Event Types:
Circuit – Players race with up to seven other racers on a closed race course with a set number of laps.
Sprint Class – Up to eight racers take part in a race split into two teams with different performance classes with each having four racers.
Speed Challenge – Players race with up to seven other racers on a closed race A to B course. The courses are generally designed for players to hit very high speeds.
Drag – Racers face off against each other in a knock-out tournament.
• Four different level of hardness
• Easy graphic optimizer feature to rise down and up graphics quality during game play to have a fixed frame rate.
• Rubber Band AI: Dynamic game difficulty balancing
• Very enjoyable Semi-Arcade game play with nitro support
• Realistic suspension and tire model
• Keyboard – Game pad and mouse input controllers support
• Special Kurdish music tracks.

Quick Race:
Players can freely choose cars and race them in a race day they’ve created. Players can choose the events and locations.

Locations:
Many of the races take place on well-known roads in Kurdistan Mountains.
There are 15 track available with Day – Night – Reverse and All in rainy

Cars
There are a total of 24 drivable cars in SHOFER.