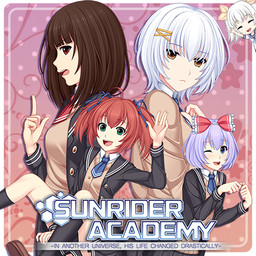 Sunrider Academy is a Visual Novel game made by Love in Space and published by Sekai Project in april 2015 for PC. The game itself is a dating sim, which in addition to meeting with the girls players will play the role of vice president of the student council. Try to find a balance between work and regular meetings every day with lovely.

You will act as a handsome man named Kayto, from the beginning we are introduced after sleeping with his sister Maray, after talking with him seems a player option in which he must decide what to pumping characters (Athleticism, Charisma and Intelligence) and then he went to sleep again , In the morning we realized that Kayto unusual student, he called the president of the Student Council, the purpose of the President to monitor the three, as he put it “the club is very distressed” that clubs will be developed, taking a large number of new entrants, and increase the number of award. He will also faced with women who are flirty and sexy.

You are Kayto Shields, an ordinary man thrown into an extraordinary adventure. It was only his first day as the vice president of the Sunrider Academy student council when the unreasonable class president appointed him to be the school club manager. “These clubs cause nothing but trouble,” she said. “I’m appointing you to take charge and fix them up by the end of the year!” Add to that another completely unreasonable bet with his little sister that he’ll get a girlfriend by the end of the year, and Kayto’s school life already seems hectic! But that’s not even the worst of it! Kayto soon learns that the captains of each of the clubs he’s supposed to manage have serious issues of their own. Surrounded by girls lacking any common sense, his whacky days at Sunrider Academy begin! You will take control of Kayto as he carefully manages both his student life, and his responsibilities as club manager. Study hard, bring glory to Sunrider Academy, and get a girlfriend! Piece of cake, right?