Tales From The Borderlands 3 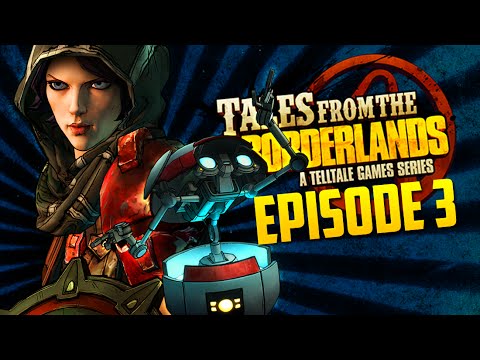 Tales From the Borderlands Episode 3: Catch a Ride contains some of the funniest scenes Telltale has ever written. It sets up its fantastic characters, both familiar and completely new, in a handful of tense situations, and the chess board of Rhys, Fiona, and company’s long con expands to a galactic level to present tough choices, satisfying outcomes, and compelling mysteries throughout the course of this two-hour chapter.

Catch a Ride takes all of the major players from the first two episodes and forces them to collide within the opening minutes. Your ragtag crew, Hyperion suits, violent crime syndicates, and even a handful of Vault Hunters all engage in a series of Mexican standoffs that had me questioning my mission, my friends, and even myself. Of course, throughout all of this, Telltale’s spot-on humor comes through in spades, especially when it comes to your dialogue decisions. I kept finding myself stuck between a handful of decisions both because I wanted to see where the story would go and because I knew that each option would yield varying, always hilarious results.

In a rare feat for Telltale, Catch a Ride unfolds quite a bit differently depending on whether you chose Fiona or Jack at the end of Episode 2. We get completely different scenes and interactions that made me really enjoy playing through it a second time.

Much of the episode separates the characters into two core groups, which allows Rhys and Fiona to grow as people in some really substantial, player-defined ways. My Rhys has always been a bit of a Han Solo-esque scoundrel – yeah, he does some less-than-admirable things, but he ultimately has a heart of gold – so watching him open up and legitimately fall for someone in a series of scenes that deal with the early stages of a crush in cute, genuine, and embarrassing ways left a big dumb grin on my face. Likewise, Fiona’s slow realization that she might have what it takes to be a legendary Vault Hunter, while simultaneously dealing with the choice of whether she even wants that from her life, defined her character in ways I didn’t see coming. After the credits rolled on this episode, I’m even more curious to see how the pair of them make their way to the present-day framing story.

A chunk of Episode 3 takes place inside a gorgeous geodesic dome filled with some really beautiful scenery. I appreciated moments where I could wander around a moonlit grove and explore the alien, luminescent plants, as well as the fantastic payoff that came from underestimating Pandora’s natural flora. The setting is a sharp contrast from the barren deserts and filthy factories that have housed most of the scenes in Tales from the Borderlands so far.

The unexpected highlight of Catch a Ride is Gortys, who in the span of a single episode, became possibly my favorite character in any of Telltale’s modern series. Her sweet, naive nature is completely juxtaposed with the harsh realities of Pandora, which makes every single one of her interactions amazing. From the strange existential interactions with her mechanical kin Loader Bot, to the hilarious ways she deals with her first brush with mortality, Gortys is exactly the kind of foil that Tales needed.

The only major thing in Episode 3 that didn’t impress me were the action scenes that fell at the beginning and end of the chapter. Telltale’s best action to date came in The Wolf Among Us, when the brutal fights were just held between two people. On the flip side, Borderlands’ action comes across as just too chaotic for Telltale’s sometimes rickety game engine. The transitions stuttered, the framing of the fight was oftentimes incomprehensible, and I found myself failing a handful of times simply because I didn’t realize that the game had handed control back to me in the middle of a brief QTE. Obviously, the Borderlands universe is one punctuated with violence, but the underwhelming action scenes really feel at odds with the quality of Telltale’s humor and storytelling.

1. Extract
2. Burn or mount the iso
3. Run the Setup
4. Copy Crack From CODEX dir to Installer
5. Play
General Notes:
. Block the Game.exe in your firewall to protect the game from trying to go online
. If you install games to your systemdrive, it may be necessary to run this game with admin privileges insted