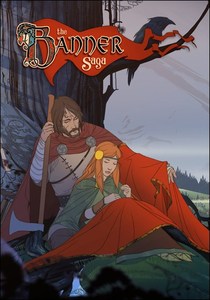 “Short answer: role-playing meets turn-based strategy, wrapped into an adventure mini-series about vikings. Travel through stunning landscapes straight out of an animated film as your party escapes what could be the end of everything. Battle painstakingly hand-animated foes in strategic, turn-based combat. Make decisions with real consequences in conversations with people you’ll actually care about.

The Banner Saga is a mature game aimed at gamers who appreciate art, story and strategy. Hope you’ll join the caravan.”

The Banner Saga was fully funded by Kickstarter. Its initial goal of $100,000 was easily surpassed, reaching $723,886 as of April 20, 2012. Backers will receive a variety of Kickstarter Prizes according to their pledge value.

To train your mind with the game.. you can have a briliant mind and you can positif thinking ith everything in your life.