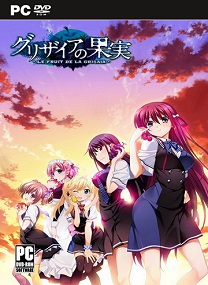 SIX FRUITS BARE THEIR FANGS AT THE WORLD. The academy was their orchard. In this place of learning, protected by high walls from the outside world, there arrived a single young man who’d lost his purpose in life. He’d lost sight of what he wanted to protect. He passed his days in a haze of guilt and regret. All that remained to him were the chains around his neck… And a life worth less than that of a stray dog. But in that academy, he would meet five young women. And in time, he would discover a new thread of hope.

• That girl’s very birth was a mistake – The sin of disobedience
• A life not so different from death – No one’s going to protect you
• And survival itself can be a punishment.
• That place was their orchard. Those young women were the fruits of remorse, grown on the tree of sorrow.
“What can I do for them…?”
• In that thought lay the undying hope one young man had dreamed of finding

12 Responses to The Fruit of Grisaia-CODEX