The Suffering Ties That Bind 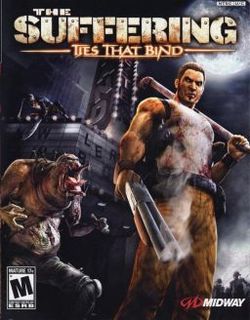 The Suffering: Ties That Bind is a 2005 first/third-person shooter psychological horror video game, developed by Surreal Softwareand published by Midway Games for PlayStation 2, Xbox and Microsoft Windows. The game was released in North America in September and in Europe in October. It is a sequel to the 2004 game The Suffering.

The game continues the story of Torque, a man sentenced to death for murdering his ex-wife and two children. In the original game, after arriving on death row in Abbot State Penitentiary on Carnate Island, off the coast of Maryland, an earthquake rocks the island, and the prison is attacked by strange supernatural creatures. During the mayhem, Torque escapes. Ties That Bind continues his story, as he flees the island and heads back to his home town of Baltimore, where he must face his past misdeeds, and confront his nemesis, a mysterious criminal kingpin known as Blackmore. Players who have a saved game from The Suffering can choose one of three different openings, based upon the ending they received in the first game. As with the original game, Ties That Bind also features three different endings, depending on the players’ actions throughout the game.

Ties That Bind received mixed reviews, and was generally criticized as being too similar to the original game. Some critics felt the game would only appeal to fans of the first game, while others argued the more complex storyline and serious moral issues made it worthwhile on its own merits. The game was a commercial failure, and although Surreal Software initially spoke about the possibility of a multi-game series, no further Suffering games were made.

The Suffering Ties That Bind