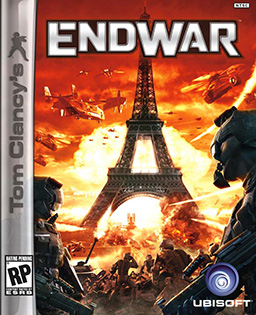 It’s not often that a game arrives in the IGN offices that is embarrassing or awkward to play in front of the other editors. But then, most games aren’t Tom Clancy’s EndWar. This real-time strategy (RTS) game from Ubisoft Shanghai offers something new for the genre. It’s not just an RTS on a console, it’s an RTS made for the console. An innovative voice control and camera system has been devised to work around the pesky fact that controllers don’t have nearly as many buttons as a mouse and keyboard. And while it may be awkward to sit there in an office talking to your game, it’s worth it.

Though EndWar carries the Tom Clancy franchise name, don’t come into this game expecting a tale of espionage or personal heroism. This game is extremely light on story elements and the Tom Clancy name primarily comes into play with the setting and events leading up to the game’s opening. It takes place in a science fiction setting, but you may find the opening cinematic eerily hits close to home. Tensions have been rising around the globe due to dwindling oil reserves. When a missile defense system is put into active use, effectively taking nuclear war off of the table, the great powers of the world fear the shift in power has become too great. Sound familiar?