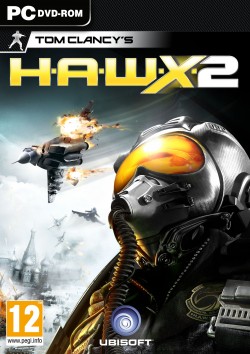 Tom Clancy’s H.A.W.X. 2 places you in the shoes of an elite pilot with
access to the most advanced and most deadly aircraft ever built !
The action packed missions take you around the world, in a race against
the clock to uncover a conspiracy that threatens the safety of the world.
Dogfights are visceral, up close and personal, with engagements that
bring enemies closer to you than you’ve ever seen before.
But dogfights aren’t everything: H.A.W.X. 2 brings you all the iconic
experiences that make up the life of a pilot: take off and landing,
aircraft carriers and air bases bustling with life, mid-air refueling,
night vision air raids, precision bombing.

New experiences are added by the new vehicles,
like the devastating AC-130U Spooky or the surveillance UAVs that are used
in espionage missions. H.A.W.X. 2 features a fully playable jump in coop
campaign and adversarial multiplayer where players fight each other
and additional units across several uniquely set up missions.

1, Mount or burn image.
in case of multiple discs mount all images to the SAME drive!
2, Install the game, select components, languages…
3, Launch the game and play.
– use “SkidRow” without “” for username and password if required!
4, Support the software developers, BUY THE GAME, if you like it!