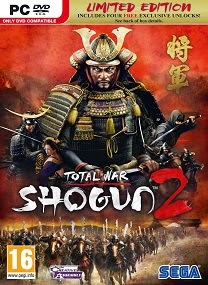 In the darkest age of Japan, endless war leaves a country divided. It is the middle of the 16th Century in Feudal Japan. The country, once ruled by a unified government, is now split into many warring clans. Ten legendary warlords strive for supremacy as conspiracies and conflicts wither the empire. Only one will rise above all to win the heart of a nation as the new shogun…The others will die by his sword. Take on the role of one Daimyo, the clan leader, and use military engagements, economics and diplomacy to achieve the ultimate goal: re-unite Japan under his supreme command and become the new Shogun – the undisputed ruler of a pacified nation.

New to Total War in SHOGUN 2
• New RPG skills and experience for your Generals and Agents.
• New Multi-stage Sieges – scaling the walls is only the beginning!
• New Hero units inspire your men and carve through the enemy.
• New rotating 3D campaign map.

NOTE: The Fall of the Samurai released by SKIDROW crashes randomly and doesn’t even launch on Windows 8/8.1. We bring you fully working version with all the DLCs included! Big thanks to RELOADED for cracking this one!