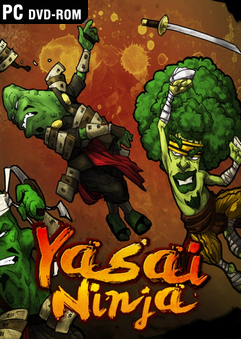 Yasai Ninja presents Kaoru Tamanegi and Broccoli Joe, the good guys in this new Hack & Slash adventure, with a high dose of action, a combat system designed for one or two players, puzzles, large quantities of humor, friendship, personal improvement, honor and collaborative spirit belong in this unique atmosphere, which puts our characters in their own universe. Set in Feudal Japan, our vegetable samurais face multiple enemies.

Samurai Onion is imprisoned by order of his former Shogun, General Cucumber Kyrui.

Kyrui has betrayed the Emperor and seized power, sending to prison all the samurai warriors in the empire that could present an obstacle, including Samurai Onion.

Samurai Onion is desolate, abandoned and betrayed by his Shogun. In his cell there is a foreign fighter, Broccoli Joe.

Broccoli Joe convinces Samurai onion to escape and fight again, but first they must travel across the lands of the empire to seek support and allies among the tribes under submission of the evil General Kyrui.

Some of the tribes to join forces include Asparagus, The Leeks, The Renegade Cucumbers, The Pepper Rangers … forming a large army to fight against the troops of Kyrui to defeat him, liberating the Emperor and restoring freedom and justice in the Kingdom.

Speed based: in this type of level, the character has to move fast to keep going. There are a few enemies, and a few puzzles. In most cases, the level theme is to flee from serious danger that can’t be overcome, like a forest fire or running on water.

Fight based: this type of level is about battle. Normally a more open field full of enemies who have to be defeated to continue.

Puzzle based: This type of level is less common than the others and a little slower to play. You will have to stop and think how to solve the problem that you are facing with your abilities and the objects in the area.