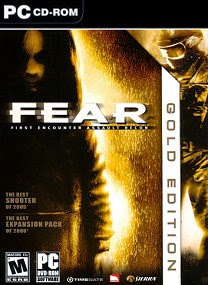 F.E.A.R. (First Encounter Assault and Recon) is a first-person close-quarters combat game for the PC. The story begins when a paramilitary force infiltrates a multi-billion dollar aerospace compound, and the government responds by sending in Special Forces. The group loses contact with the government when an eerie signal interrupts radio communications–and when that interference subsides moments later, the team has been destroyed. That’s where you come in. As part of a classified strike team created to deal with threats no one else can handle, your mission is simple: eliminate the intruders at any cost, determine the origin of the signal, and contain the potential crisis before it gets out of control.